The woman from Florence. 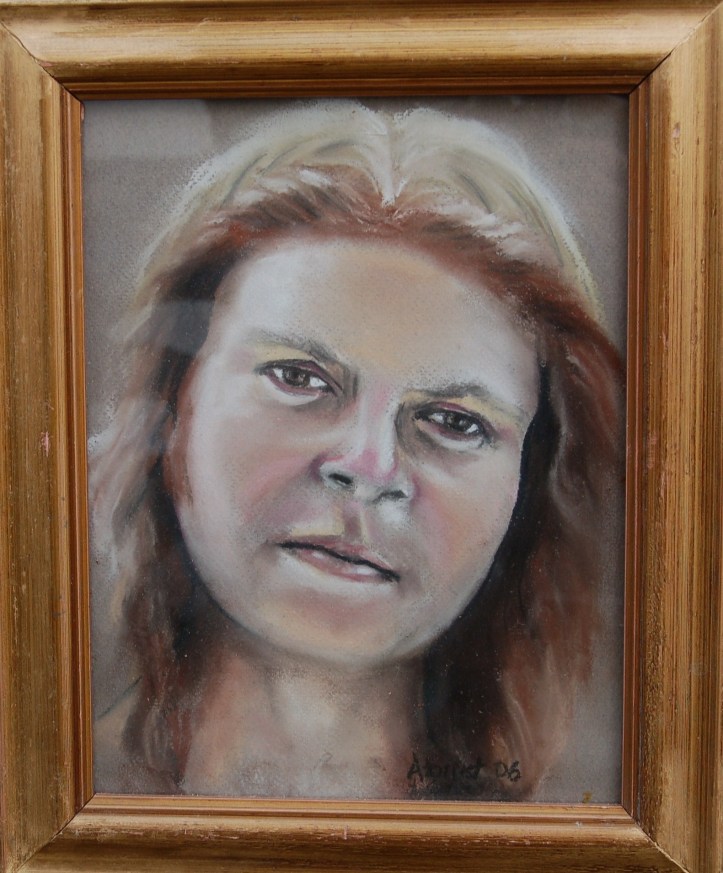 It was because I was looking at all my paintings and writing down which I wanted to put in the exhibition (Mostra)  that I  started looking at some older work I had done. I was making a list of which ones needed framed or touched up  and realising I have more than I think.

Then I noticed a small pastel portrait which was hanging in a corner. I looked closely at it to see if it was worth including  in the group and I remembered how it had come about. It has something about it, which  is why it is still in a frame and not put away in the don’t want  to throw out folder but don’t quite know what to do with.

It is of a woman I met briefly in Florence.

Several years ago when I was going to be on my own in the country for a week or two I decided I might as well have a little holiday and being an artist , well it was obvious, I should go to Florence. So I booked the train and set off by myself. I had booked a room in the cheapest place I could find which said it was central, near the Duomo and had a wonderful roof terrace over looking the whole of Florence.

It was a ten hour journey , with a change at Rome, but it was really exciting as I love seeing new places and I had heard a lot about Florence. It sounded really romantic.

The railway station is fairly central and I didn’t have much trouble  finding my hotel. It was fine, sort of chabby chic and I had an ensuite shower room. (The shower room was very funny as the shower was virtually over the toilet. I suppose some people might have objected, but it just made me laugh.)

The roof terrace was as good as in the advert. You felt you could practically reach out and touch the Duomo. The terrace had tables , chairs and was full of plants. If you wanted a romantic spot to sit in the evenings it would have been hard to beat. I however was on my own.

Florence was a good place to visit by myself. It wasn’t  too big, there were lots of tourists and I blended right in. I had booked ahead to see some of the well known places but I actually enjoyed the streets, the street artists, the antique/junk shops, the architecture, and the piazzas where there was always a band playing and people sitting drawing.

I liked the museum of modern art, but the royal rooms were the most obscene thing I have ever seen. Too much richness crammed into small spaces. Over the top tackiness times 100, even though the stuff wasn’t fake.

However , I think I must have the kind of face with an invisible tattoo saying “Soft touch” and that’s how I met the woman in the painting. I was sitting on the steps of the Duomo just chilling out and watching people when these two women approached me. Ever since I gave someone money in  a street in Scotland , and was promptly dragged away literally by some person angrily saying , “Just what did I think I was doing encouraging beggars.” I have been wary of  giving money to people.

But there was no way I could avoid these two so I got my purse out , took out some money and then said,” I will give you this if I can take your photo , as I would like to paint you.” In my mind I wasn’t so much giving them money but paying them to model. Spurious reasoning.

So they let me take their photo and that is how I ended up painting the portrait.

I stopped off in Florence a few years later on my way back to Pisticci and I saw the woman again. I had looked at her face enough while painting her to recognise her. I wished I had had a copy  to give her. Being of a romantic disposition I figured that being painted might have been something special and I would have liked her to have known. Though she may have seen it from a different point of view.

There is something about her face in the painting that makes me want to know who she was and is. I think, even though technically I can paint better now I have caught something of a person , beyond just a face and it pleases me.