I can’t remember what prompted me to take part in #paintseptember on twitter, but i am so glad I did.

Every day this last month I have either completed a painting each day, or a drawing, or fixed an old painting or occasionally spent two days on a commission or in one case a double portrait. I did not know I could do so much work in such a short time.

However I am amazed at what I did. I have painted mostly exactly what i wanted to paint. I started with portraits of my family – each one completed in a day, and then I went on to two self portraits based in my studio and both with lots of meaningful stuff in them. I had been wanting to do something like this for ages and have now framed them both and they are hanging in my studio.

Then one day as I was struggling to come up with a subject that interested me I remembered a photo I had taken of a coffee and dolce and so I painted it. I aimed to make it look delicious and It does. I had never painted anything like that before.

I was just cutting up pieces of canvas and painting everything 20x30cms which seems to suit me and is possible to complete in a day. It was very liberating and I couldn’t wait to do the next one.

Some were from photos I had taken years ago and always wanted to paint but never had time- or thought they would not sell.

One day , I had finished my cup of coffee , thought it looked really pretty-  so I painted it.

And the last three were in a different format because I have a commission this size and I thought I would experiment.

Included in the month’s work was a sketch for a tattoo of a dandelion seedhead and a double portrait  which were commissions.

I am so glad I did it all. It has increased my confidence in my ability,  increased my speed, restored my enthusiasm and confirmed my belief that I can paint what I like and other people will like it too. (I still need to sell stuff)

And finally I have been greatly inspired by many of the other artists taking part  in this project and have lots more things I really want to try now.

Most of the paintings I did are on  http://studiobasilicata.wordpress.com  but I am putting my   personal favourites here as well. 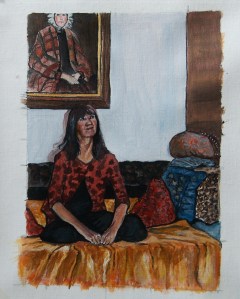 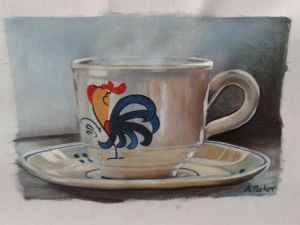