After not selling anything other than some prints at my exhibition I was not too bothered as I had been expecting it would be more about visibility rather than sales.

I had enjoyed the exhibition experience greatly and had been out almost every night at the feste and rarely in bed before 2am for about ten days afterwards.

So I was chilled or so tired that I couldn’t care when there was a knock at my door and a strange man stood there and asked if I had any small paintings for sale. He had apparently bought from me before. After looking round he bought one of the paintings I had done especially for the exhibition. (It just so happened I had booked my flight back to Scotland for a visit just before he arrived and what he paid ,covered my flight.)

That was so good, but the very next day one of the three elderly gentlemen , who I had painted earlier in the year stood at the door . After coming in and investigating the large painting which he was in he said he would be back the next day with money as it was to be a gift for his daughter. And the next day he arrived with said daughter and the money and took the painting away. He also ordered another one exactly the same for his other daughter. At the same price.

The very next day someone else arrived at the door with one of the musicians out of my musicians painting. It was his birthday and his friends were going to buy the painting with him in it for a gift.

That was another big painting.  Both of these paintings I had done earlier in the year when I was starting to paint the things I really wanted to paint.

I am so pleased with these sales. I am still doing commissions when I get asked but I can’t wait to start on some more big paintings of …………….. 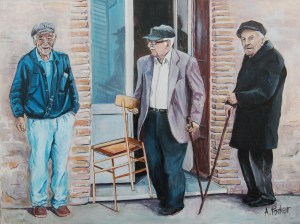 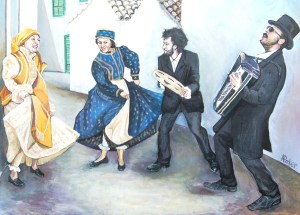 I have added a drawing of 3 little girls who were very excited when I took their photo as they thought that now they would be famous. I am doing my best , so that I can tell them when I see them next that people from all over the world have seen their portraits.