Has been a slow start to the year due to building work going on upstairs and a complete lack of soundproofing. It has been impossible to work some days and others its just possible to tune out banging and clattering from upstairs, but working has been a nightmare and my studio , which has always been my creative safe space feels like it is being assaulted and there is nothing I can do about it.   The work was supposed to be finished by end of December, then the end of January . I assume it will be eventually finished by  mid march when the people who own it arrive for a visit. And possibly the ugly scaffolding which is right across my house  will be gone by then as well.

Then I may or may not be losing money because I am  either not working or working really slowly.  I have been getting up very early to get some time before the builders arrive- some days  they are here at 7.30am. I can forget having a siesta as they stop for a short lunch and straight back to work. It is not horrendous every day and in fact it sounds like it may be coming to an end- but its 3 months I won’t get back – and its not finished.

If I had had enough money I would have moved out but that was not an option. A lot of what I have been feeling is because its january – the month of many bills ,and to be unable to get working to pay them has given me a lot of sleepless nights.

But enough of that.

I have done some work  in the last few weeks. I completed 2 commissions and 2 small portraits. That is about a third of what i would normally do.

But its only another month and then it should be finished. I will get my garden back and maybe my house will become my safe space again or I will sell up and move to somewhere with no neighbours above……… 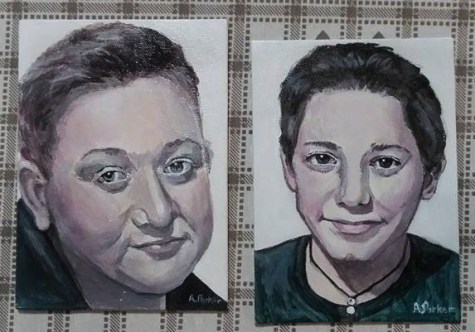 Some of the ideas not yet started are  to write the childrens book I have been meaning to write since college,  paint one painting a day and put on internet,  go plein air painting in the calanche ( new idea),  paint a family portrait which I really like……..

Have begun to free write for 30 mins every day- and is helping me to come up with some other ideas, have  4 small portraits drawn and ready to paint, have organised a trip to scotland via malta ( taking sketch book) and back by florence ( go to art galleries) (courtesy of ryanair special deals and AIRBNB)

So hoping that some peace and quiet will result in a much more cheerful me next time I write this.